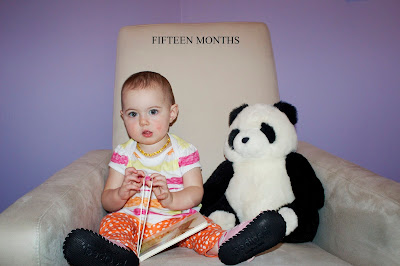 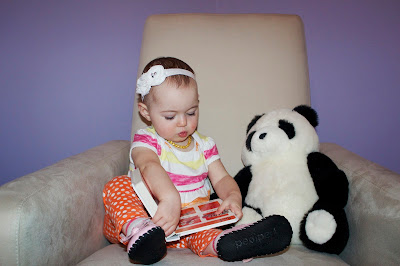 It's nearly impossible to take a picture of this girl sitting still anymore.
She also isn't a fan of wearing headbands or clips anymore!


Sleep: Still a work in progress. She has good nights and bad nights. Sometimes she sleeps through the night and wakes up at 6:30 am and other nights she is up 1-2 times and hubby has to wake her up at 7-7:30 am for the day. Once day she will consistently sleep through the night- probably when she is a teenager! Hubby and I have been sharing the wake ups- if she wakes before 4 am I go in and if she wakes after 4 am, he goes in.

Audrey had her first sleepover away from home this past weekend. She had a lot of fun at her Auntie K's house and loved all the attention her cousins showered her with. She didn't want to come home!

Eating: She is still fairly picky. She likes variety so the key is to just keep offering her food, even if she refused it a day or so ago. Her go-to favourites are: cheese, toast with peanut butter, raisins, cheerios, muffins (I make a healthy version for her), hamburger, chicken, and hummus. She also likes almond milk.

Nursing isn't as frequent but usually 1-2 times a day/night.

Teething: Her eye teeth (final four) are just starting to cut. They seem to be taking their time. The top two have just cut through and the bottom ones are bulging in her gums.

Crawling/Standing/Walking: Audrey is now running everywhere! She has the cutest little walk and barely crawls anymore. I need to invest in one of those leashes so she doesn't run away into traffic. She hates holding hands (always has).

Eyes: Grey/hazel. They are looking more grey/blue than hazel these days.

Hair: Going from dark brown to a lighter brown with red hues.

Playing: She loves being outside. I'm sure she is going to be a tom boy- playing in the dirt! She has to be watched like a hawk since she digs in the garden and eats the dirt if you aren't quick enough. She enjoys catching bubbles and "mowing" the lawn. She is getting better at playing by herself, however she does like it when you sit with her while she plays. She puts her shapes in the box and if she can't get it in the right hole so wants you to do it. She's also figured out that if she opens the top slot she can just drop the blocks into it!

Talking: More words every day! Big ones now are "Go" and "Bottle." The day home must say bottle since we usually say milk or water rather than cup or bottle. She has also been putting her finger to her mouth and saying "shhhh" which must be another thing she has picked up from the day home. "No" is still her most used word and I get a kick out of it every time she says it. I probably shouldn't encourage her but it's too cute!
She also tries to say "shoes" which comes out more like "shhhhooozzz." I told her to bring me my shoes yesterday and she brought me my flip flops. It amazes me every day how much she knows and understands what we are saying to her. She also says "hat"- sounds like "haaa." Her favourite food word is "banana"- said as "nana."

Sign Language: She hasn't been signing as much- I'm sure because they aren't signing to her at the day home. She still signs for medicine (we give her a homeopathic cough medicine since she has had a cold for over a month now), water, milk, food, and more.

She is actually getting better at signing correctly. She used to sign "more" by clapping her hands and now does it as shown below.

Weight/Clothing: No recent weigh-ins so not sure. Still wearing mostly 12-18m clothes and size 3-4 shoes.  Clothes are definitely getting worn out/ruined before she is growing out of them.

Personality: Dramatic. We have an actress on our hands. Maybe even an Oscar winner.

Current Favourite Things: iPhone, her baby monitor receiver, blanket, books and magazines, a pair of shoes that are 2 sizes too big and her Seahorse glow-bug.

Dislikes: Being cleaned after a meal, diaper changes, having someone brush her teeth.

Miscellaneous: I love this age so much! It's a bit challenging now that she wants to run everywhere but it's easier to redirect her attention from something she can't have and it's so much fun watching her figure things out for herself.
Posted by Nicole @ Haute Runner at 7:00 AM