Warning- this post is not about running, triathlon or anything athletic.
A couple girlfriends and I decided to plan a weekend getaway to Invermere, BC on the weekend. ﻿We had access to one of the girl's boss' cabin so we headed up there after work on Friday. We only went for 2 nights but with the amount of stuff we brought you would have thought we were going away for a week! Girls and our stuff!
﻿ ﻿ After the adventurous stop, we head back on the highway. No more than half a kilometer down the road we see a pull out with an outhouse!! Of course that would happen to us!

We finally made it to Invermere around 8pm. L couldn't remember where the cabin was so we drove around for 20 minutes looking at all the cabins trying to figure out which one we were staying at! She ended up calling someone to google the address. Once we made it, we unloaded all our luggage and headed back into town for dinner.
We went to McToogles, a Scottish pub. They had some live music playing and it was a good atmosphere. I think we traumatized our server with our weird drink requests but overall we had good service and the food was great.
After dinner we went back to the cabin and had a few drinks. The evening got away from us and we finally went to bed around 3:30am! Haven't stayed up that late in a long time!

The next day we woke up late- 1pm!! Guess we needed our sleep! After a delicious brunch of gluten free pancakes, scrambled eggs and yogurt we headed into town for some shopping. There was a Classic Car Show n Shine going on in Radium and Invermere so it was packed downtown.

﻿﻿
We checked out some local stores. They usually have some interesting and overpriced things.
We found some funny napkins and mugs and had quite a laugh over them.
We found a candy store that we raided. So much candy! Too many options! I wanted it all. I guess I have to run to work off the calories I consumed this weekend! (OK so there is mention of running in this post!)
We went down to the (deserted) beach to take some pictures. The mountains are so beautiful and I am sure the lake would have been nice if it wasn't so freezing cold out! You can tell how windy it was just looking at how choppy the water was.
This isn't the greatest photo but you can kinda see the deer on the neighbor's lawn. He was just hanging out. He didn't want his photo taken though. Pretty anti-social. We also saw a squirrel on the patio dancing away. It was kinda cute! He ran away before I could take a picture though. 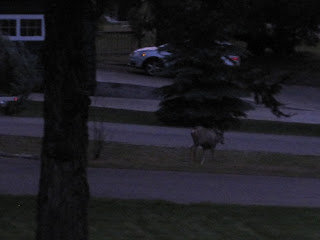 Since we had such a late brunch, we didn't end up having dinner until 10pm. We hung out at the cabin listening to music, drinking and laughing. ﻿We brought a Wii but we didn't end up playing it!
﻿We slept in again on Sunday morning. We had breakfast, packed up and hit the road. It was pouring outside so that wasn't much point in sticking around. The trip back was pretty uneventful except for the insane fog that appeared the second after we hit the Alberta/BC border!! It was pretty scary driving for a few minutes!

That concludes the weekend for me! Now it's back to reality...
Posted by Nicole @ Haute Runner at 3:31 PM