Weekend in Canmore- before the race.

Friday Night
Hubby and I went up to Canmore on Friday night since my parents have a condo there and we thought it would be nice to have a relaxing weekend. After work we packed up and headed to the mountains. It isn't too far of a drive from our place- about 75 minutes.
Once we arrived hubby cooked up some burgers on the BBQ and my parents came over for a visit. When they left we went over to the hot tub which was so nice.

Saturday
We had great plans of getting up early to watch the Banff Triathlon but sleep seemed so much more important and it was raining! Around 11am we headed to our favourite Canmore breakfast spot- The Summit Cafe. 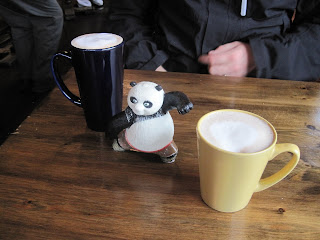 Maple lattes & Kung Fu Panda table marker
After a yummy breakfast/brunch picked up our race packages at the school which was super fast. We also drove part of the half marathon course to see what we were up against. Most of the course is on pathways except for the beginning so we couldn't really see all the hills but we knew approximately when the elevation would change (later in the course!) and where the turn around was. 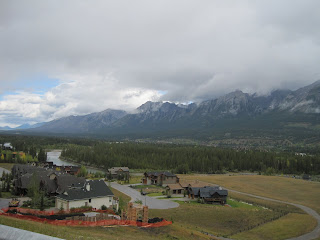 This picture shows the elevation change as we
start off running by the river and have to climb
even higher than where this picture is taken from.
After we checked out the course, we wandered around downtown Canmore.

We had a celebrity sighting- Debbie Travis. She was filming her new show "All For One" in Canmore. 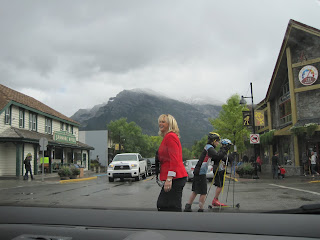 Who is that crossing the street in front of us? 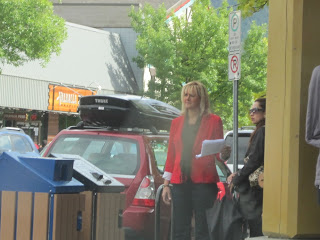 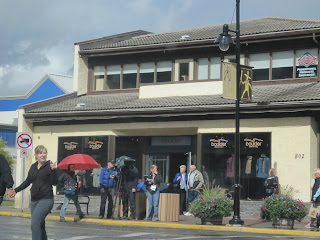 After our brush with fame, we met up with some old friends of hubby's that live in Canmore. It was nice to see them again and we went on an adventure to Banff to do some window shopping.

For dinner we ended up at The Wood at the end of Main Street in Canmore. The food was pretty good. We were both careful about what we ate and drank so we weren't too adventurous. I would rate this place as a 7/10.
My favourite restaurant in Canmore (not that I have tried many) is Crazy Weed. Hubby wanted to step out of the box and try somewhere new which is why we ended up at The Wood.

We returned to the condo and set up all our stuff for the morning. There is a lot less stuff to have to worry about in a running race than in a triathlon! I filled my water bottles for my fuel belt and stuck them in the fridge. I decided to wear my long running tights, long sleeve technical shirt, and my light running jacket. It was going to be a little too chilly for me to wear capris. 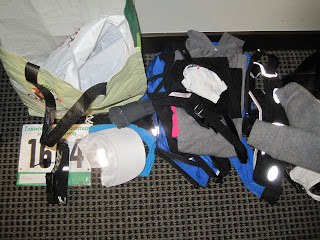 All my stuff- a little reflective
After a quick visit with my parents, we headed to bed to get a good night sleep.

Sunday details and race report up next...
Posted by Nicole @ Haute Runner at 7:43 PM