I can't believe 2011 is over! Seems like yesterday I was making goals and signing up for races at the start of the year. In a blink of an eye we are on to the next year!

This year was full of so many amazing experiences that it's hard to narrow it down to a few. This is going to be long!!


I started off the year training for my 2nd half marathon in February- the Hypothermic Half! It was not cold at all- a balmy 5C. I managed to get a PR of over 10 minutes which was probably one of my proudest running moments! I couldn't have gotten through the winter training session without my amazing fellow group of runners and it was just the perfect race in every way!


In March we celebrated hubby's 30th birthday! We had a big party and had a blast!!


March also marked the month that I met Leigh for the very first time! We don't live very far from one another and after conversing back and forth over email for a few months we decided it was high time to meet up for a run! It was a cold, snowy day so we went to her gym and ran around the track while getting to know one another! I didn't scare her off and we have met up a bunch more times since then!

April was a big running month for me as I was training for 2 half marathons two weeks apart. The first was the Calgary Police Half Marathon and the weather was awful. I posted a PW because the footing was so bad that you just couldn't run fast for fear of falling and breaking something (which people did). As terrible as it was, it was a good learning experience. It taught me to be mentally tough when things aren't going your way and also that you can't control everything but not let that get in the way of reaching your goals. My amazing instructor stuck with me the entire race and helped drag me to the finish line. Thanks!


And in true Calgary fashion, two weeks later for the Big Run Half Marathon the weather was gorgeous!! It was a much smaller race and there were a few nasty hills towards the end but I managed to squeeze out a PR by 19 seconds! Again it was all due to the amazing support of my running buddies and Howard who stuck with me the entire race, even when I wanted to cry at the side of the road at 19K!

At this point I was feeling a little tired with all the long training runs, but I didn't want to stop running (um, addicted?) so in May I decided to train for a 10K- the Scotiabank Jugo Juice 10K. I didn't follow a training program per say, just kept up my regular running routine. Since my last official 10K race was a year prior and I wasn't very well-trained for it, I achieved another 10+ min PR- 1:03:10!! I proved to myself that I could dig deep to beat my goals and pain is all relative. This was probably the biggest race I have participated in and I loved it!! Can't wait to do another 10K race.

It was around this time that I signed up to participate in a Sugar Free Challenge.  The creator of the Holiday Bootie Buster Challenge, Amanda put on this new 10 day challenge. While hard, it was amazing to see how addicted I was to sugar, but after only a few days I was no longer craving it. It was a real eye opener to see what food products actually contain sugar (a lot!) and how to find alternative foods to replace my regular food staples.
The biggest thing for me was how much better I felt without sugar- no more bloat, I had energy and because I was eating better (whole foods) I lost 5 pounds. Don't get me wrong- passing up the cupcakes, eating Greek yogurt (sorry can't do it!) and swearing off muffins was difficult but it's possible.

June brought some life changing news that we will remember forever- we found out that    we are having a baby! We were in Medicine Hat for my cousin's wedding when I took the test and we were ecstatic to see the pink lines!

In July, hubby and I took a road trip to British Columbia. We had fun checking out the sights in Fairmont, Kelowna and Penticton. The weather wasn't fantastic but we made the best of it just relaxing and enjoying the time off work. It is so gorgeous there!

August 26th marked our 5th Wedding Anniversary! Time sure has flown by! We celebrated by going to Teatros for a nice dinner. 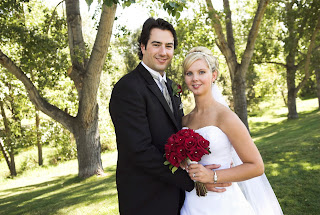 In September we embarked on a family road trip to Vancouver Island (recap here and here). Everyone except my mother-in-law and I hiked the West Coast Trail so we were the support group. It was a fun trip touring all over the Island and visiting Victoria for the first time. We all had a blast and definitely made plenty of memories.


Once we got back from our trip, we got some more exciting baby news! We found out we are having a Baby Girl! After always expecting to have boys, this was a pleasant surprise!


We also welcomed two new women to the family when both my brothers-in-law got engaged and one got married!! So happy to finally have some sisters-in-law!

The fall continued to be uneventful (compared to the first part of the year!)- busy growing baby and trying to stay active when the running slowed down (around 20 weeks). I started taking a prenatal aqua size class which is a nice way to meet other pregnant women while staying active. It is certainly far less intense than what I am used to with a half marathon or triathlon training program but every bit of exercise counts!

I also managed to meet up with a few more bloggers which was pretty neat. Leigh, Leana, Kristen, Heather  (and Zoey!) and I met up for dinner one night when Kristen was in town. It was nice to finally meet these ladies in person after reading their blogs for awhile! 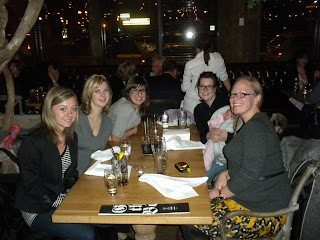 I also met Alison and Rachel when we went out with the husbands to celebrate Leigh's birthday! Everyone got along really well and it was fun to get to know everyone better! We need to do it again sometime soon ladies!! 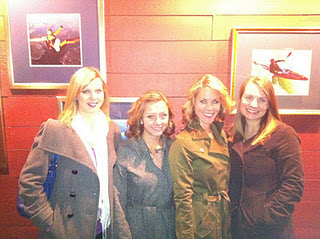 Both Alison and Leigh helped me accomplish one of my goals for the year- to volunteer at a race. We were part of the food crew for Catch the Elves in November. It was a small race for a great cause (muscular dystrophy). It was nice to give back to the running community and to help support a local charity at the same time. 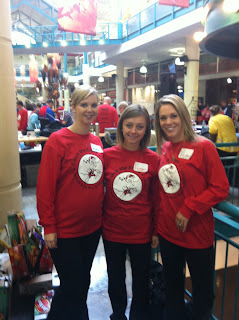 December was filled with Christmas parties and preparations. I was finally able to do something that I have been waiting to try for years- snowshoeing! Sure there wasn't tons of snow on the ground but it was fun. Definitely will be doing this again. 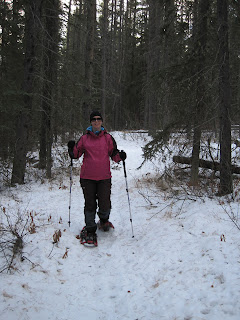 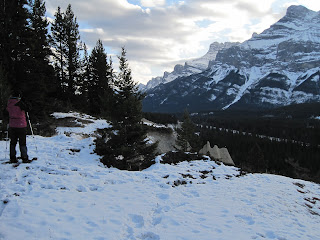 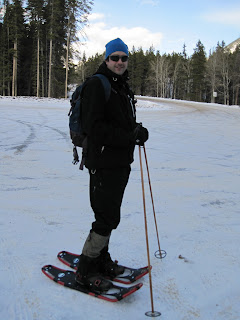 We ended the month celebrating Christmas with our families. We are so blessed to have great relatives and the ability to live close to most of them so we can spend time together during the holidays.

Christmas Eve with the in-laws


We ended the year by doing the Resolution Run (walk for me!) on New Years Eve. It's a fun 5K run/walk and a great way to start off the new year. Fitness has become such an important part of our lives and we have met so many great people by staying active. 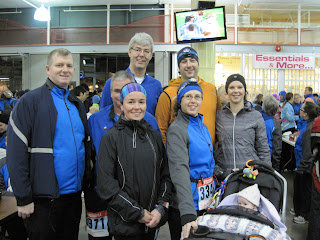 It has been such a great year. Full of so many accomplishments, changes, a few challenges but overall good times! It has definitely been a memorable year and I hope 2012 will be just as good!!