1. I am starting to feel like a broken record. I am so sick of this never-ending rain! Didn't we get enough in May? June is usually our highest rainfall month and it's no exception this year.

In Canmore, a small town about 45 minutes from my house, is under a state of emergency from the heavy rainfall and resulting mudslides. The TransCanada has been closed in several locations and people are stranded on the road or even at home without power.

I am thankful that the storm is only affecting my hair and not my house.


2. I am not good with change and I hate confrontation. This is not a good combination because it usually means I have a hard time dealing with issues. I just let them go on forever, build up anger and resentment until I finally burst. I'm really trying to work on this in a few areas in my life. It's really hard to get out of my comfort zone though. It's kind of like running actually. In order to get faster, you need to run faster. In order to change something you don't like, you have to change something. It's all up to me.


3. This picture was taken on the C-train (LRT). It's one of the newer trains, which suck because the seats are so small. Unless you are a 10 year old girl, it's very uncomfortable to sit next to people. You can see the man's arm on the left is overlapping on the other seat. There isn't enough butt & shoulder room. Considering that it's mostly adults riding the train (I think?) it's a horrible design.

Anyway, there is this sign above the window that says

Does anyone else immediately think of "striping?" There is a pole right in front of the window. I'm pretty sure they are referring to 'in case of an emergency' and removing the window to use as an exit. Couldn't they have used better wording?

It's not the best picture since I was trying to be discreet. 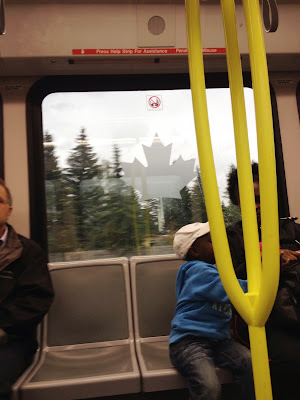 Does anyone else think this is weird?
Posted by Nicole @ Haute Runner at 10:20 AM