How big is Baby N?


Baby is keeping his eyes open when awake, coordinating breathing with sucking and swallowing (explains the hiccups!), bones are hardening and more major brain development.

What I'm Wearing?
I was wearing comfy clothes, mostly leggings, over the holidays, but now that I'm back at work, I'm in the dressy clothes again. I definitely prefer dresses over pants- the belly feels too constricted when I have pants on!


Aversions or Cravings?
I wish I had an aversion to chocolate...


How I'm feeling?
It has been a rough 1.5 weeks. I had some pretty intense, yet irregular, contractions a couple days before Christmas. I think my body was trying to tell me to slow down as I was crazy mad trying to get everything ready for Christmas. I was super uncomfortable and having to breath through each of them but since we had just discussed Braxton Hicks versus "cervix changing" contractions in my Centering Session with the midwives the week before I knew I just needed to rest, unless they became stronger and more regular, which they did not. It definitely does not make me look forward to labour!

On Christmas Day, I was really sick in the middle of the night. Again, I think my body was tired from all the excitement the last couple of days, plus all the rich food so I was puking in the middle of the night. I felt awful all Boxing Day so we didn't do anything. After a day of rest I felt much better on Friday so I think the key is to not overdo it. So much easier said than done around the holidays and with a toddler! Thankfully I have an amazing hubby who took over everything so I could rest all day long. So lucky for that great guy!

He has been moving lots! A bunch of people felt his crazy hiccups on Christmas Day. They were so strong you could see them from the outside. Poor guy! He's also been moving into weird positions so that a limb is sticking out.

Half popped! I still can't get over how weird it is since it never did this with Audrey!

Earlier in the week when I was sick and having contractions it sucked and I was so tired but it's better now. Unfortunately Audrey has started randomly waking up in the night again so I often have a hard time falling back asleep.

Between all the Christmas festivities and then being sick, I didn't get many workouts in. I keep hoping that I will have the energy to do them after Audrey goes to bed but by that time I am ready for bed myself!


What I'm Excited for?

- Getting the nursery painted, furniture bought & set up.
- Maternity leave- can I start it now?
- Maternity photo shoot with Whitney in a few weeks!

What I Miss?
- I definitely missed wine and champagne over the holidays. I did have some sparkling juice to make up for it.
- I miss having energy. I have all these grand plans to get things done but in reality I have to listen to my body and do what I can. There is no point in overdoing it since then I just need to rest for a full day which isn't very productive!


Highlights?
- Christmas, of course. It was so much fun for Audrey this year. We were all so spoiled! Santa brought me the prettiest Swarovski earrings that I LOVE, a bunch of gift certificates (yay shopping!), new slippers, lots of makeup, a few scarves, and even a gift certificate for house cleaning! All things that I really needed (& wanted!).
- Spending copious amounts of time with family and friends. It was nice to just be together.
- Sleeping in and not having to go to work for a week! I really needed the break physically and mentally.

Finally, we have progress in the nursery!! After a pregzilla moment of threatening to take a saw to the remaining big furniture in the office/nursery, hubby called in the troops (aka his brother) to move the big desk and sofa bed into the basement. It was no small feat. One of the glass doors on the desk hutch didn't survive the move and smashed into a million pieces just as they got it into the basement. The sofa bed was challenging to move- railings had to come off the stairwell and the one wall into the basement is quite beat up but nothing that some patching and paint won't fix. I thought for a moment that my saw suggestion might actually have to come into action!

The basement is now almost a completely organized, usable space. My treadmill &workout area are set up (they had to be moved), my desk is set up and everything that needs power, has power. Now the trick will be to keep it this neat and organized!

The nursery paint has been bought. Hubby has said he will try to do some painting while Audrey naps (he is off with her most of this week) but I'm not getting my hopes up! If one colour is done by the weekend, I'll be happy.

Baby Boy received a few Christmas gifts- two beautiful, homemade crocheted hats from Auntie A, and some cute little outfits! I took inventory of what he has so far (I tried to include Audrey- I hope crayon comes out of fabric...) and so far it looks like he won't be naked for the first couple of months! Still have a few things to buy to fill in the gaps but there is no longer the threat that he will be in mostly pink!

My bestie came over for a visit and dropped off the carseat canopy and blanket she made for the baby. They both turned out so well and I can't wait to use them!

We have a pretty good idea of the furniture needed so it shouldn't take much to pick that up in the next couple of weekends (once the room is painted). We have to buy Audrey's new bed as well. We also need curtains for the massive window in the new nursery so hopefully they won't be too hard to find.

I've ordered a few things on Etsy that I'm waiting to arrive- closet dividers, monthly stickers, soother leashes. Still have a few more things that I want to order but I need to see the painted room with furniture set up before I can decide on a few things.

We also ordered the 2nd seat for our stroller. Audrey tried it out at the store last week and she didn't seem to mind it. Another thing crossed off the list!

I'm still on the hunt for a new diaper bag. I was not a fan of my first one, too big and too much like a diaper bag, and my second one is nice but still not quite what I want. I've found the perfect one but I can't find it in the right colour. I really don't want to compromise since that's why I'm currently looking for my 3rd diaper bag! Hopefully I will find it soon (and maybe on sale?) but if not I'll make due with my current one, which really isn't that bad. Plus my husband might kill me if I buy another bag...

Wow- it's really setting in that in 7-ish weeks we will have a newborn! 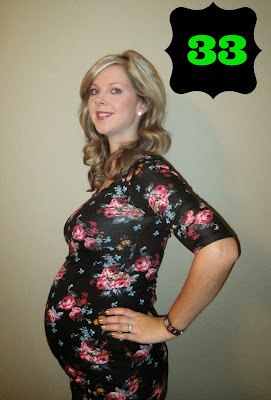