This weekend definitely did not go according to plan but it still turned out! I think the biggest lesson that I am learning is that I need to be more flexible with my plans so as to not stress out when they don't happen exactly how I think they should. It's the planner/control freak in me and it's only going to get harder with two little dictators adding to the chaos!

Friday I had a wonderful dinner date with a good friend who recently moved back to Calgary. I love this girl to death and she always makes me feel so much better when I'm around her. I'm so grateful that our friendship has continued even though we haven't lived in the same city for 3+ years. As usual, our dinner was 3 hours long but we definitely caught up!

During the day on Friday, I was emailing with Whitney to confirm some details for our maternity photos next weekend and she mentioned that she happened to have an opening for this past weekend, if we were interested. My first thought was "heck, no! I don't have time to prepare outfits and decide on poses and the location in less than 24 hours, especially with dinner plans that night." That said, I did originally want photos done around the 34 weeks mark as the closer I get to my due date the more puffy I look/feel and the weather also looked a bit better than forecasted for next weekend. I decided to be spontaneous and went ahead with the earlier date.

Saturday, I had an early morning chiro appointment to try to get my hips & pelvis in the right place and help this baby flip head down. My chiro used the Webster method and assured me that there is lots of time to get baby to flip and with a couple more appointments my hips and pelvis will be good.

Hubby did the second coat of the main nursery colour while Audrey and I were at my appointment.

The rest of the morning I spent getting organized for our photos. I hadn't even thought about what we were going to wear, or use for props, or locations really until the night before but sometimes less time is better so I can't over think things. The weather was looking beautiful and I was getting very excited!

We planned to meet up at the Calgary Zoo at 1:30pm. We thought it might happen, and sure enough it did, Audrey fell asleep on the drive there. We decided that I would meet with Whitney, do some individuals shots first and then hubby and A would meet us for the last half.

Whitney, as usual, was amazing! She sure knows how to make you feel good and put you at ease. We went into the Dinosaur Park and she took some of the most amazing pictures. She has such a brilliant eye. She showed me a few pictures and I'm amazed at how great she made me look!

We went over to another section of the Dinosaur Park and the wind started to pick up. The clouds started to move over us and suddenly it was raining! WTH??? Where did that come from? We ran for cover- thankfully we both had hoods!

We tried to wait out the sudden crazy rain/snow storm but the wind picked up and it wasn't getting any better. At this point, hubby and Audrey joined us. We attempted to go to the Conservatory which is an indoor atrium, but it was closed to the public for a private function! We decided to reschedule the last half of the shoot until next weekend, our original date! So thankful that Whitney was ok with that since we didn't get any pictures with hubby and/or Audrey.

Since we had promised Audrey a visit to the zoo and we were already there, we visited a few of the animals. She loved the elephants, the gorillas and of course, the penguins!


It was an eventful day to say the least! I was pretty tired after an afternoon of walking around so I had a quick nap on the couch before hubby went to the hockey game. I spent the rest of the night taking it easy and watching a CBC documentary called The Motherload. Pretty interesting.

Sunday morning Audrey and I headed out to Target. We had a long list of things to get. We managed to check off a few items but looks like I still have some shopping to do. I found some baskets for the nursery, another crib sheet and a whole bunch of newborn and postpartum supplies.

It's tough work shopping and Audrey fell asleep on the way home! I managed to get a bunch of stuff done while she napped and hubby put up the tape to paint the stripes in the nursery. Still not done but maybe by the end of the week it will be.

Audrey's new favourite thing now is to colour or draw. We bought her a couple more colouring books and it keeps her occupied for quite some time. 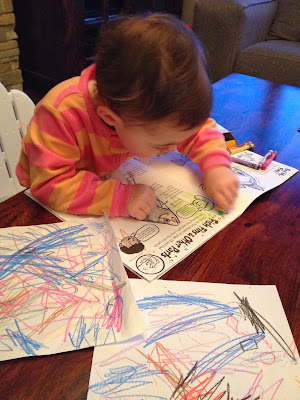 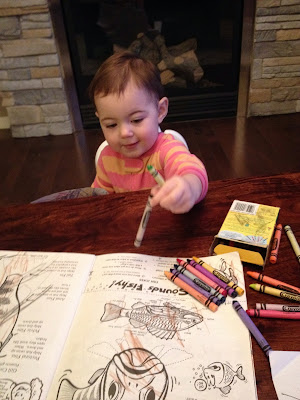 After her nap she wanted to go outside so we went for a quick walk around the block before heading out to my sister's for dinner. 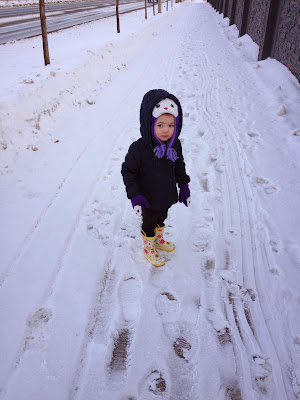 We had a great time visiting with my sister's family and Mom. Audrey adores her older cousins so it's nice to have them play with her.

We were having way too much fun so we didn't leave until past Audrey's bedtime. Thankfully she fell asleep in the car and didn't even flinched when we moved her to her bed when we got home.

We still had lots of prep to do for the week so hubby and I were both up until almost midnight. Definitely not the smartest thing since we are zombies today!!